It’s finally here! Fifty years ago the United States, and since the U.S. considers itself the center of the universe, the world was visually introduced to The Beatles on The Ed Sullivan Show. Seventy-three million people were exposed to what England had seen for the previous two years, and fell in love.

It wasn’t supposed to happen that way. Many viewers tuned in to witness a musical farce or to see the band fall flat on its face. Who doesn’t slow down at a traffic accident and gawk or at least sneak a peek. The hype had been there for the past month as I Want to Hold Your Hand rose to #1. Who were these guys usurping our record charts?

I was a witness and remember comments from my family about their long hair. (Really? Look at the haircuts. They were just touching the ears!) Someone said that John Lennon resembled a “singing golf ball with hair.”(??!!) And, of course, there were plenty of comments about the crazy screaming girls in the audience. (“What are they screaming about? They can’t even hear the music!”)

I can honestly say that I wasn’t totally won over by The Beatles from that first appearance. Even as a child, I was skeptical. I think it was my unfamiliarity with some of the music. That soon changed. But I returned the following weeks to witness those incredible moments. And man, Ringo Starr could sure rock those cymbals–and drums! But I stayed well clear of the ongoing discussion among the girls on who was cuter: John Lennon or Paul McCartney? That was so annoying! I just wished I didn’t have to hear it!

And when I visited New York City in 1985, before the age of home-owned video tapes, I went to the Museum of Television and Radio (now known as the Paley Center for Media). The first thing I wanted to see was that first Ed Sullivan appearance. I wasn’t the only one.I found out that that show was the number one requested viewing item. It seems everyone wanted to relive those magical moments when The Beatles changed the world!

Nowadays, I can just post it on my blog. What a wonderful world!:
http://youtu.be/CqrauzHPpwE

Now, I know that on February 9th many of us will be wrapped up in the WInter Olympics, but true Beatles fans will be tuning in to CBS from 8-10 p.m. for their special, “The Night That Changed America: A GRAMMY Salute To The Beatles.” It was taped immediately following The Grammy Awards broadcast this week. 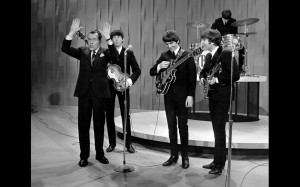 The two-hour presentation will include tributes by a number of remarkable performers including John Legend, Alicia Keys, Katy Perry, Keith Urban, Brad Paisley and Pharrell Williams.

Of course, we just want to see Paul McCartney and Ringo Starr working our favorite tunes! Word is that Dhani Harrison joined in on one song.

Seventy-three million people tuned in to The Ed Sullivan Show on February 9, 1964. How many people will tune in this time around?

Well, I’m just a bit overcome by the amazing Grammys presentation on Sunday. Such a great mix of performers! But, I have to say, what brought a tear to my eye was watching Ringo play with Paul. OMG! What a moment!!!

Our esteemed Beatles were awarded a Lifetime Achievement Award for their contributions to popular music. Well deserved, I must say. And, as it’s coming up on the 50th anniversary of their coming to America, very timely.

Not all the Grammys are awarded during the prime time broadcast, so you might not be aware that Paul walked away with five Grammys this year! In addition to the Lifetime Achievement Award as part of The Beatles, he also was nominated for and won the following four Grammys:

With the 50th anniversary of The Beatles first appearance on The Ed Sullivan Show coming at warp speed–about the only thing taking my mind off the “polar vortex,” is tonight’s Grammy Awards. It has plenty of anxious anxiety for Beatle fans: Will Paul McCartney and Ringo Starr perform together again? They are both scheduled to perform, but it hasn’t been officially stated that they will do something together.

Oh. well, at least this year’s Grammys should be better than last year’s with both of them on the bill. But I don’t see how it could beat that killer performance of the Abbey Road Medley when Paul traded guitar licks with Bruce Springsteen, Joe Walsh, and Dave Grohl. But I hope it does.

The show should keep McCartney fans riveted since Paul is nominated for five Grammys for his work on Cut Me Some Slack–the song he did with Nirvana’s remaining members, Live Kisses–the DVD version of his standard covers album, Kisses on the Bottom, and the Deluxe reissue packaging for Wings Over America. I have my fingers crossed…………….

There are so many 50 year anniversaries for The Beatles this year. Today is one of the biggest because the band’s first Capitol Records album release of Meet the Beatles occurred on January 20, 1964. Little did the world know what was to come along in just a few short weeks……………… 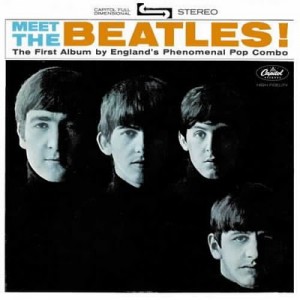 There’s no better way to kick off a year than watching a promo video for “George Harrison’s “Ding Dong, Ding Dong!!”:

I know it’s hard to believe, but The Beatles’ release of “She Loves You” turned 50 years old. There are a lot of things that will turn fifty in the next few years, but it also gives everyone a chance to reminisce.

The song was loaded with many hooks. “She Loves You” — with Ringo’s tom-tom intro exploded on the radio. The signature “yeah, yeah, yeahs” were another incredible hook. The beautiful harmonies, the wistful lyrics, the “woos,” the way the song retarded (slowed) and sped up in spots, and the final odd chord. What an incredible song!

And if you got to watch The Beatles play it live, you were able to see a visual hook: the head shakes to the rhythm of the music.

One of my favorite performances is from a British film called “Pop Gear”–named after the British slang phrase for “cool” that was repeated ad infinitum in the movie. At least it made the film humorous, but very dated. “She Loves You” by The Beatles, however, has never tarnished as a song!

Near record heat made me think of one of my favorite songs from “Electric Arguments” by The Fireman (Paul McCartney). Here’s Paul at a sound check giving it a run through:

Ringo is introducing a new e-book titled, Photograph, with many never-before-seen photos of his Beatles days. Check out this great interview on the Today Show and pick up a copy of his book on iTunes.

Visit NBCNews.com for breaking news, world news, and news about the economy

This book release coincides with his new exhibit at the Grammy Museum called Ringo: Peace and Love. Find more info here. It’s open June 12, 2013 through March 2014 and even has an interactive element where you can take a drum lesson with Ringo! We hope to visit sometime in the fall, so stay tuned for more details and a first-hand review. 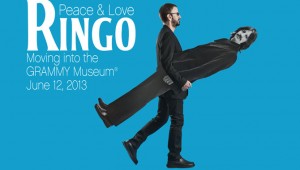